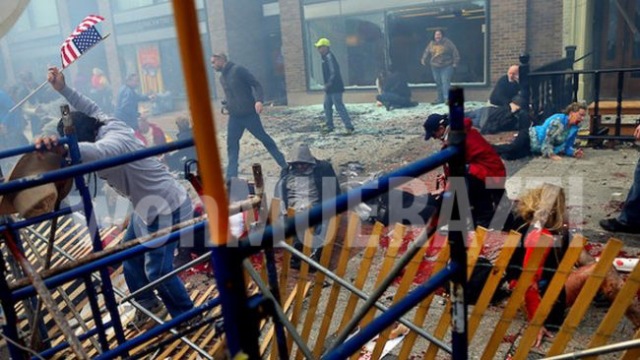 Here is a list of some of the worst bombings in the US dating to the 1800s, including some famous attempts that failed:

April 15, 2013: Two bombs explode in the packed streets near the finish line of the Boston Marathon, killing two people and injuring more than 80.

Jan. 17, 2011: A backpack bomb is placed along a Martin Luther King Day parade route in Spokane, Washington, meant to kill and injure participants in a civil rights march, but is found and disabled before it can explode. White supremacist Kevin Harpham is convicted and sentenced to 32 years in federal prison.

May 1, 2010: Pakistani immigrant Faisal Shahzad leaves an explosives-laden sport utility vehicle in New York’s Times Square, hoping to detonate it on a busy night. Street vendors spot smoke coming from the vehicle and the bomb is disabled. Shahzad is arrested as he tries to leave the country and is sentenced to life in prison.

Dec. 25, 2009: The so-called “underwear bomber,” Nigerian Umar Farouk
Abdulmutallab, is subdued by passengers and crew after trying to blow up an airliner heading from Paris to Detroit using explosives hidden in his undergarments. He’s sentenced to life in prison.

Sept. 11, 2001: Four commercial jets are hijacked by 19 al-Qaida militants and used as suicide bombs, bringing down the two towers of New York City’s World Trade Center and crashing into the Pentagon. Nearly 3,000 people are killed in New York, Washington and Pennsylvania.

Jan 22, 1998: Theodore Kaczynski pleads guilty in Sacramento, California, to being the Unabomber in return for a sentence of life in prison without parole. He’s locked up in the federal Supermax prison in Colorado for killing three people and injuring 23 during a nationwide bombing spree between 1978 and 1995.

Jan. 20, 1998: A bombing at an abortion clinic in Birmingham, Alabama, kills one guard and injures a nurse. Eric Robert Rudolph is suspected in the case.

July 27, 1996: A bomb explodes at Centennial Olympic Park in Atlanta during the Summer Games, killing two people and injuring more than 100. Eric Robert Rudolph is arrested in 2003. He pleads guilty and is sentenced to life in prison.

April 19, 1995: A car bomb parked outside the Murrah Federal Building in Oklahoma City kills 168 people and injures more than 500. It is the deadliest U.S. bombing in 75 years. Timothy McVeigh and Terry Nichols are convicted. McVeigh is executed in 2001 and Nichols is sentenced to life in prison.

Feb. 26, 1993: A bomb in a van explodes in the underground World Trade Center garage in New York City, killing six people and injuring more than 1,000. Five extremists are eventually convicted.

Nov. 7, 1983: A bomb blows a hole in a wall outside the Senate chamber at the Capitol in Washington. No one is hurt. Two leftist radicals plead guilty.

May 16, 1981: A bomb explodes in a men’s bathroom at the Pan Am terminal at New York’s Kennedy Airport, killing a man. A group calling itself the Puerto Rican Armed Resistance claims responsibility. No arrests are made.

Dec. 29, 1975: A bomb hidden in a locker explodes at the TWA terminal at New York’s LaGuardia Airport, killing 11 people and injuring 75. Palestinian, Puerto Rican and Croatian groups are suspected, but no arrests are made.

Jan. 29, 1975: The US State Department building in Washington, D.C., is bombed by the radical left group Weather Underground. No one is killed.

Jan. 24, 1975: A bomb goes off at historic Fraunces Tavern in New York City, killing four people. It was one of 49 bombings attributed to the Puerto Rican nationalist group FALN between 1974 and 1977 in New York.

Jan. 27, 1972: A bomb wrecks the New York City office of impresario Sol Hurok, who had been booking Soviet artists. One person is killed and nine are injured, Hurok among them. A caller claiming to represent Soviet Jews claims responsibility, but no arrests are made.

March 1, 1971: The Senate wing of the US Capitol Building in Washington, D.C., is bombed by the radical left group Weather Underground. No one is killed.

March 6, 1970: Three members of the Weather Underground accidentally blow themselves up in their townhouse in New York City’s Greenwich Village while making bombs.

1951-56: George Metesky, a former Consolidated Edison employee with a grudge against the company, sets off a series of blasts at New York landmarks, including Grand Central station and Radio City Music Hall. No one is killed. Known as The Mad Bomber, Metesky spends 16 years in a mental hospital.

May 18, 1927: 45 people – 38 of them children – are killed when a school district treasurer, Andrew Kehoe, lines the Bath Consolidated School in Michigan, with hundreds of pounds (kilograms) of dynamite, and blows it up. Investigators say Kehoe, who also died in the blast, thought he would lose his farm because he couldn’t pay property taxes used to build the school.

Sept. 16, 1920: A bomb explodes in New York City’s Wall Street area, killing 40 and injuring hundreds. Authorities conclude it was the work of “anarchists” and come up with a list of suspects, but all flee to Russia.

May 4, 1886: A bomb blast during a labor rally at Chicago’s Haymarket Square kills 11 people, including seven police officers, and injures more than 100. Eight “anarchists” are tried for inciting riot. Four are hanged, one commits suicide and three win pardons after seven years in prison.

One thought on “Our condolence to the families of the Boston Marathon bomb blast victims. Did you know that there have been 23 bomb threats on America soil?”

GOT A CELEBRITY TIP OR PIC STORY? Contact us now or send us your photos.